I had the opportunity to go for a long hike last Saturday. Friends, one of the most amazing things about living east of San Francisco is the East Bay Regional Park system. I mean, just look at all these open spaces within an hour’s drive of my home! It is such a gift.

This particular Saturday, I tried out a brand new park: Briones. I had never been there before, but with my energetic dog, plenty of sunscreen and water, a few snacks and my AllTrails app, I was ready for some adventure.

Now, there were some recommended hikes I found on AllTrails, but none of them seemed quite long enough for me. I figured I would easily be able to make my own route, taking some of the less-traveled trails. My goal was to make it to the Briones Peak, which apparently had beautiful views of the surrounding mountains, hills and valleys.

After about a mile into the hike, which was mostly uphill, I made the choice to jut away from my destination, veering east and downhill instead of west and uphill. Whereas before, I had to be cautious of Spear behaving well towards the passing people and other dogs, on this new trail, I had no such concerns. We were the only ones on it. And since there are 2.5 million people who live in the East Bay, seclusion is a sweet commodity. 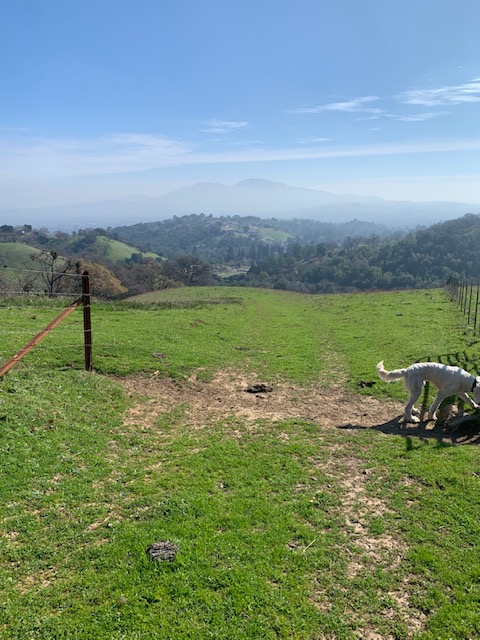 Down, down, down we hiked, enjoying lovely views of Mount Diablo and the peaceful country-side around us. Once we hit the valley, the trail began finally heading west along a small creek. And it was there where I realized why this trail was so empty.

The trail that ran along the creek was wide, yes, but you could also tell that for the last two months, this trail had been mud. Thankfully, it hadn’t rained for a while, so almost all of the mud had dried up. However, the big hoofprints of many cows had sunk most of the trail a foot and a half lower than where the path “should have been.” I wish I would have stopped to take a picture. It was not fun to try to hike through/on top of/around. Pair that with the feeling of being VERY secluded and VERY far away from anyone who could help should anything happen, I was beginning to doubt my choice of trail.

In time, the trail began to climb back up out of the valley. We actually passed another hiker. I paused on a fallen log to have a snack and give Spear some water. The forest around us was beautiful. We continued our quest to get to Briones Peak. 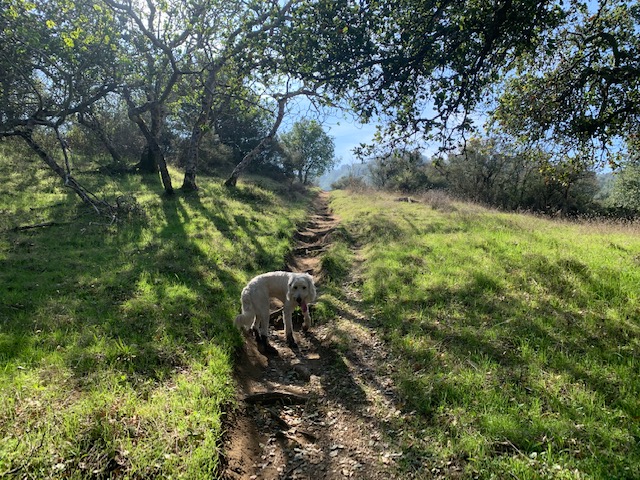 The climb was pretty strenuous, both for me and my pup, but I knew we were getting close. I saw that we had just about a mile left of a pretty straight shot to the peak. That mile took us up, up, up. And part of that climb was through a thicket so close to the trail that I could not see much besides bushes and trail. My imagination got the best of me, and I began talking loudly to my dog, taking a cue from my brother, Jon, who likes to sing  loudly “to the bears” when he hikes in Colorado. I knew there were no bears here, but I was not so sure that there were no mountain lions creeping about. My adrenaline was in full-force, and my body was getting tired from all the climbing.

Finally, we reached a clearing where two paths intersected. I was hopeful that we would see other hikers again soon. I was able to relax for a bit. I thought about just skipping the peak and heading back to the car. This restful hike was becoming more trouble than it was worth. However, I only had 0.2 miles of climbing left and I knew I wanted to make it to the top.

And…. We made it! The views were very nice, but honestly, having the chance to sit on the park bench at the top was probably my favorite part.

As I rested and refueled, I pondered which trail I needed to take back to the parking lot. There was the straight-shot one, which had elevated my blood pressure and was not-at-all enjoyable at parts. Or there was one that looped around to the west. I wasn’t sure that Spear or I had the energy to hike longer than necessary, and my experience on the secluded loop valley trail earlier had me a bit gun-shy. I asked God to show me. I had the sense that we were supposed to head west and take the longer loop.

Can I just tell you that it was my favorite part of the whole hike? The descent gradually wound around the sides of hills and through a lovely, shaded forest with abundant varieties of trees, bushes and ferns. The path was soft and smooth, and we jogged along most of it. My heart was light and filled with joy that God would give me the sense to take this trail–I was so glad he knew which one would be best for me.

As I often do on my hikes, I came back to God with the question: “Is there something I need to hear from you today?”

Two phrases popped out at me:

The shortest way is not always the best way.

The best way is not always the easiest way.

I thought about Jesus and the ways in which he was tempted in the wilderness (Matthew 4:1-11). Three different times, the devil came to Jesus and offered him a short-cut–a way to get around the hard work that the Father had set before Jesus to do. Each time, Jesus trusted the wisdom of the Father rather than the appeal of what was easier. And in the Garden of Gethsemane, toward the end of Jesus’ life, Jesus asked the Father for an easier route (and was quite capable of taking an easier route), but he was willing to do the Father’s will above all else (Matthew 26:36-56).

I was forced to stop and examine my own life and motives, and the decisions that I make day-in and day-out. So often, I prefer comfortable and safe. So often, I want what is easiest or quickest. But the Lord, in his kindness and grace, was reminding me that quick is not always best, and best is not always easy.

I became thankful for the muddy, hard-to-pass trail of the valley and for the spooky, adrenaline-pumping hard trail up the hillside. Without experiencing those hard things, I would not have sought out God’s wisdom, nor known the joy of the sweet trail down through the forest.

So it is in our daily lives. If we do not have to walk through difficult, weary paths, then we cannot fully know the joy that comes in the beautiful, peaceful times. Our God is the God of both. We can trust him to care for our every need, no matter which path we are on. And he delights in leading us in the best path–the one that leads to him.

What kind of path do you feel like you’re on right now (muddy and challenging, or beautiful and delightful)? What might God be accomplishing in you on your journey?

View all posts by christaprill

One thought on “The “Right” Path”