I had the opportunity this week to coach my son’s soccer team. It was my first solo coaching gig (is “gig” the right word for this?). I volunteered to help the other two dads on the first day of practice. I always seem to have two other boys in tow (where did they come from anyway?) and I’m never sure I can balance being mom and coach during practice and games. The commitment level of an assistant works well for me at this time. This week, however, both dads would be gone. Coaching duties were all on me. Having helped out with practices and few other games already I have found that I am LOVING this. 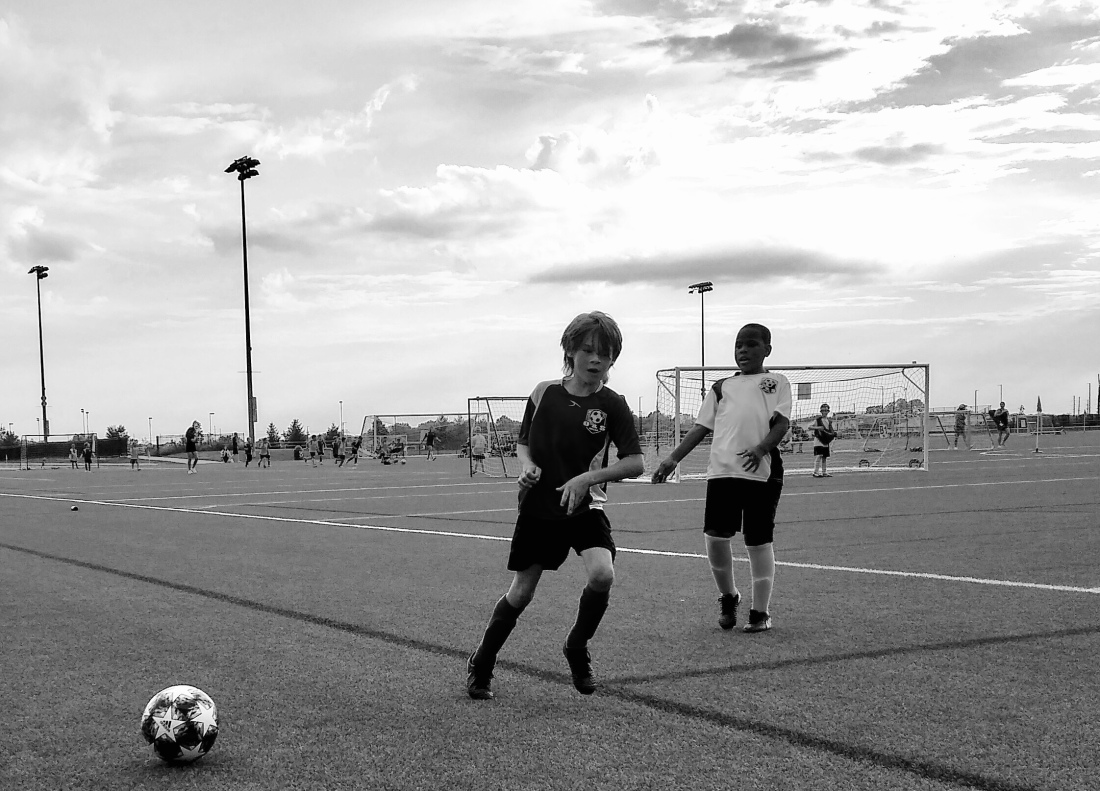 I should let you know, soccer is my favorite sport. I was a late comer as I started playing around age 12, but never stopped. I only took a break in college because I tore my ACL three times. I mean, some things in life just really slow you down. I helped coach a JV high school girl’s team where I taught for one year and when I moved to where we live now I found an adult woman’s team and joined. I haven’t played since I’ve had kids though, for fear of another ACL tear and slowing down mom life. But it seems this sport just calls my name every time I get close to a field.

So here I am, coaching solo (honorable mention to the mom who helped with the bench players and Thomas the husband who made sure to back me up with eyes on the field and gathering kids when needed) on a week night, with 11 third and fourth grade boys all telling me what position they want to play at once. Thank heavens I had already mapped out positions for each 12 minute quarter ahead of time. Demands and decisions like that could have sunk me before the game began.

I won’t give you play by play of our hour long game but I will give you some of my favorite teachable moments of the evening.

Coaching, much like teaching, makes the person in charge the biggest learner of all. To stay one step ahead of the team I had to be prepared and a bit practiced. You can’t know exactly how things will play out, but you have to prepare for responses win or lose.

There’s one player that constantly looks over at me on the sidelines, checking to see if his positioning is right. I give him lots of direction and encouragement when he looks over but when he’s deep in play, he doesn’t hear me at all. It might be because he knows just what to do in those times.

One of our teammates was playing his first game, and he was the most confused about positions. He kept trying to take thrown-ins on the opposite side of the field that were meant for another of his team members. I kept telling him to come back towards the center so the boys would have a pass when needed. Its exhausting to cover the whole field.

A couple of our kids played goalie for the first time. Goalie is an intimidating position. It seems pretty laidback until the ball is barreling down the field right in your direction. Once it hits that large goalie box, you’re like a cat with hair standing on end trying to decide the best plan of attack. Not only that but everyone is yelling at you to get it out of the box. Once that ball gets past the line though, the goalie feels the weight of loss. But a save is the exact opposite. There is elation and pride that they did their part and kept the team safe.

At one point of the third quarter we had a 3 pass succession and almost scored! What does that mean? Listen, at this age in rec soccer, a majority of the kids are just trying to take the ball away and keep possession themselves. They are only just beginning to learn that there is team around them, looking for space and trying to help out. Too often the kids don’t look up long enough to see the teammate’s location and get in that quick pass. So 3 passes in a row was a huge step.

We lost 1-4. To our fans it was a hard game and maybe even disappointing. But from where I sat, I watched kids play in multiple positions, put together some plays, goalies punt balls better than I’ve seen yet, and nobody let on defeat. Most of them just wanted to keep playing and running more.

If you would, walk back through these moments with me, and put on my glasses. There are some amazing connections I need you to see.

When I’m in a position of leadership like coaching, I may make plans, practice and try to train my team, but I have to trust God to teach me bigger lessons in flexibility and giving us all what we need in the unplanned moments. Also everyone has ideas about what they want, but I have to keep the bigger picture in mind.

Like the player who kept looking over at me, don’t lose sight of God and his ways. Reposition as needed. Then when it’s time to engage, do so with vigor!

Like the new player who was playing both sides of the field, we can’t do it all. We’re not meant to and it often takes the joy of playing away from others. We have to mind our positioning while helping where we can. Exhaustion trying to play all the parts hurts you and the people you’re trying to help.

There are some that are the protectors. They are the last line of the defense like the goalie. Think Parents. Rescue Workers. Doctors. Law Enforcement. Military. Leaders in Churches and Organizations. They have a huge weight to carry. We should acknowledge the protectors and speak out encouragement for them. Sometimes when things get past them, they will feel so very heavy. Remind them it is not over and they have not let the whole team down. Everyone is working together. They are not alone.

Like our well played intentional passes, look up. Look up. Just like the goalie, you are not alone. This life is meant to be lived as part of a community. Likely there is someone close by waiting, maybe even longing for the pass. But first you have to move your eyes off your own two feet and look up.

There will be some losses. But total defeat is not our destiny. If you walk with the Lord, the war is already won. Don’t focus on the score, but learn from the fight. Learning how to play well, fair, and as a team is way more fun than just scoring mercilessly anyway.

I can’t wait for another chance to coach these 9 and 10 year old players. After all, who is really taking away more?

Wife to Air Force Officer, Mom to 4 boys, Writer, Teacher, Motivator for friends' home projects, Lover of dark chocolate. Learning daily how to calm my spontaneity so that I can try and work a schedule. I am humbled by the love that God has for all of his creation. View all posts by Jaime Brinkmann